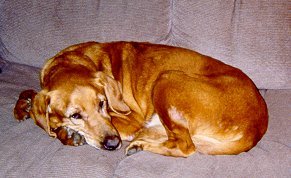 By the time Rover came to the Cohn household at the age of 9 months, he had already lived in about 6 homes. He had been named Sandy and Rusty and who knows what else. It was instant love and he was permanently named Rover. He lived up to his name, making friends all over Montpelier, Vermont but always managing to somehow make his way home. Rover loved kids and was kind to both friends and strangers. When people returned him from his wanderings, sometimes after overnight stays at their homes, he was always described as regal, a gentleman, or a joy. Even the police welcomed him into their station without issuing a fine. He charmed them every time. Rover will be missed by all who he had contact with him. We sure hope there are sticks in heaven!